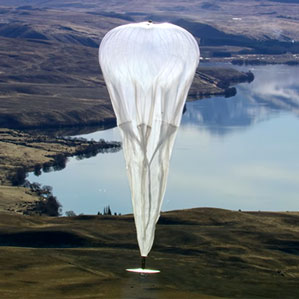 Loon is one of Alphabet/Google's most fascinating projects.  Loon delivers  high speed, broadband internet from high altitude balloons in the stratosphere. Loon is operational and beaming internet services into Kenya.  This is a very different approach to low cost, broadband internet systems like Elon Musk's Starlink which is satellite based..

Internet From the Stratosphere Not Space

Loon's internet delivery service is coming in to customers from wireless internet balloons, developed by Alphabet, Google's parent company.  And it is in direct competition with SpaceX's Starlink, the ambitious, growing mega-constellations of low-Earth orbit satellites, being launched by CEO Elon Musk to provide the world with inexpensive, high speed internet. Musk has launched nearly 800 small satellites, now in low Earth orbit, and has started beta-testing his space-based system.  Google's Loon is now fully operational for customers in Kenya.

Loon took off from Puerto Rico in May 2019 and it has set records.  It flew over Peru and the Pacific at 60,000 feet and then landed in Baja, Mexico.  It broke endurance records, spending 312 days in the stratosphere and travelled 135.000 miles. That is just about the mileage of circling the Earth. Alphabet is ramping up Loon operations. There is now a fleet of 100  Loon balloon systems in the air worldwide.

Why is This Important to the Global Internet?

This is another very innovative and less expensive means of delivering high speed, affordable global internet particularly to remote, underserved and rural areas of the Earth. Most importantly, the internet services are coming from high altitude wireless balloons.  The system doesn't require the hardware of small satellite constellations going into space to do the job.

Alphabet created the high tech Loon balloons to broadcast LTE signals in places where cell towers don't exist, including locations destroyed by natural disasters like hurricanes where no communications infrastructure remains.  Loon is operating regular commercial services in Kenya right now.  It has already successfully deployed Loon services in emergency situations.  The Kenya commercial deployment is being closely watched by potential customers.   After 7 years of development, this innovative "moonshot" from Alphabet/Google is flying high and coming into it own.