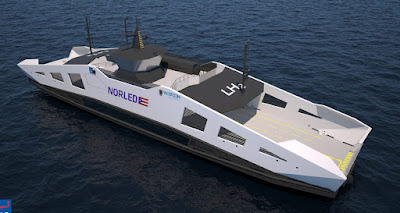 Big changes are ahead for the passenger and cargo ship industries. To meet United Nations targets for the shipping industry's carbon footprint, the first net zero, green ships will have to enter the global fleet by 2030.  Experts say that ships powered by hydrogen will be the key part of the mix . But, because hydrogen requires more fuel storage capacity than other fuels, the first hydrogen powered ships will be vessels on short voyages.  Europe is leading the way in the innovation of new, hydrogen powered vessels.

Switzerland based technology group ABB believes that passenger and shipping vessels will be the first users of hydrogen fuel cell systems.  ABB is currently working on a fuel cell based power and propulsion system for a new river vessel for the Rhone River in France.  It will be a first of its kind.

Norway, the Netherlands and Belgium

In Norway, cruise ships and ferries in the f'yords must be emissions free by 2026.  That is accelerating shipping companies to consider new fuel combinations including hydrogen.  Norwegian ship designer Ulstein is building a support vessel for the offshore oil industry that uses hydrogen as a power option.  In the Netherlands, a unique vessel - the Energy Observer is being tested in the waters off Amsterdam.  It is a hydrogen powered boat that produces fuel from the wind.  And, Belgium's CMB has deployed a hydrogen powered passenger shuttle boat that's been successfully operating for about a year.  CMB is currently building a hydrogen ferry for Japan, which will be the first for Asia.

Hydrogen powered trains, planes and now ships are being tested.  It portends a hydrogen future and Europe is a key leader in hydrogen innovation.