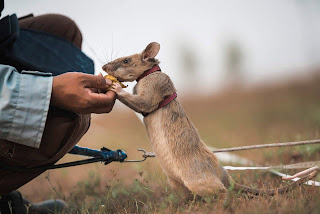 This is one of the most remarkable animal service stories to date. A trained rat, called Magawa, has detected 39 unexploded landmines in Cambodia, along with 28 unexploded ordinances, and has saved countless lives.  This incredible service animal was trained in Belgium by the charity APOPO. The organization trains rats to detect the scent of explosives and alert their human handlers.

Magawa is an African Giant Pouched Rat. The species is very intelligent and easy to train.  Every day for the past seven years, Magawa has been on landmine patrol in Cambodia, which has millions of unexploded landmines.  Magawa has cleared a lot of territory and is PDSA's best performing service rat.  As a result of its work, Magawa has received the very prestigious gold medal from the British veterinary charity, the People's Dispensary for Sick Animals (PDSA).  Only top service horses, dogs and cats have received that award before.

Rats Have a Bad Rap

Let's face it.  Rats have a very bad reputation globally.  But Magawa is being called a "hero rat".  It can sniff out unexploded land mines in an area the size of a tennis court in 30 minutes with no injuries to itself, thus far as it is soft-footed.  This is a task it would take a human to do in four days.  Incredibly, this rat can also detect TB.  5 million landmines were laid in Cambodia during internal conflict from 1975 and 1998.  The job this extraordinary service animal is doing is incredible and a tribute to its Belgium trainers and PDSA which is now based in Tanzania.