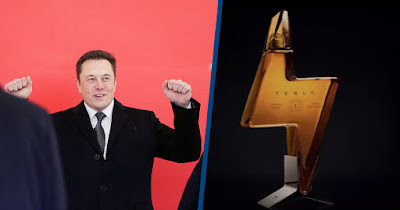 Tesla CEO Elon Musk launched a line of $250.00 a bottle tequila called Tesla Tequila  and within hours the liquor flew off its virtual shelves.  The Tesla Tequila was a promise that Musk tweeted on April Fools Day 2018 that he just made good on.  Musk has trademarked the drink which comes in a sleek, lightning bolt-like container.

This isn't the first quirky product that Musk, the marketer and entrepreneur, has sold.  In 2018, he sold flamethrowers at $500 a piece and raised $10 million for his high-speed tunnel company, The Boring Company.  He also sold 50,000 Boring Company hats.

According to Musk, Tesla Tequila will be available in selected states, including California, Washington and New York.  Tesla Tequila is made by Nosotros Tequila, which ages the liquor in French oak barrels.  The drink has a "dry fruit and light vanilla nose and a balanced cinnamon pepper finish".  Probably best not to drink and drive a Tesla.