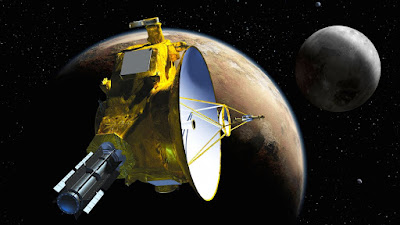 New Science: Discovery of Light in Space From Outside Our Galaxy

This is remarkable astronomy just reported by scientists at NASA.  For decades, scientists have been unable to answer the question:  How dark is space?  Meaning, is there any light in the inky darkness that you see in the night sky between stars and galaxies?  Through painstaking analysis, NASA scientists have discovered there is the mysterious glow of light in deep space coming from outside of our galaxy.

The NASA mission, to determine how dark space really is, is called New Horizon.  The New Horizon spacecraft is 4 billion miles from Earth and has provided astronomers with a series of images from its telescopes.  NASA scientists processed out any light from stars and galaxies.  They then found the glow of light - and plenty of it - coming in from outside our galaxy.  Their discovery is a first.  The light is mysterious and another unexplained mystery and wonder in the universe around us.  Their findings will soon be published in Astrophysical Journal.