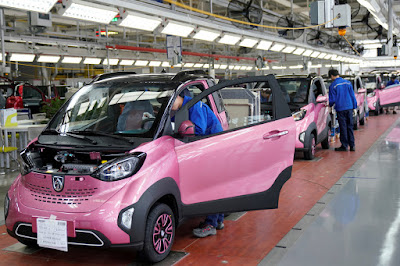 China is on a roll with new energy vehicles (NEV).  By 2025, 20% of new cars sold in China will be battery electric, plug-in hybrids and hydrogen fuel cell powered.  China is the world's largest automotive market.  New energy cars now represent 5% of new car sales in China.  The forecast that brings that number to 20% by 2025 comes from China's State Council.

What is Driving the Growth in China?

According to the China State Council, new car sales in new energy vehicles are rising because the industry has improved its competitiveness and the technology is greatly improving.  The Chinese Society of Automotive Engineers says new energy vehicles will comprise 50% of the China market by 2035.  They add that by far the biggest component - 95% - of NEVs will be battery electric vehicles in 2035.

Companies like Tesla and Volkswagen are expanding production in China to meet the increasing demand.  For 2020, electric vehicle sales are expected to hit 1.1 million.