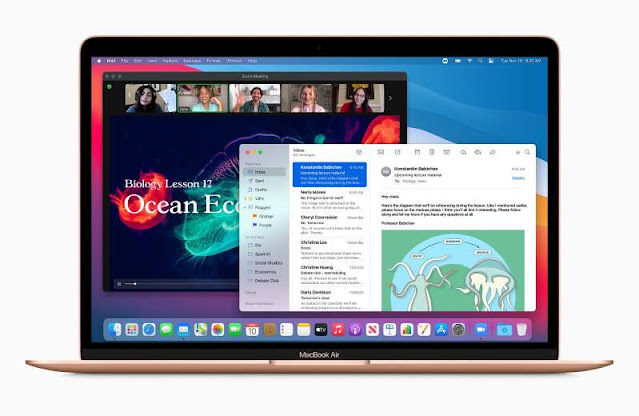 Apple just launched its MacBook Air notebook and several more new computers.  They contain the first Apple in-house designed microprocessor - the M1.  This technology is designed to closely tie together Apple's Macs and iPhones.  This is a radical change in the core, silicon chip technology for Apple.  Apple has used Intel technology for the past fifteen years as the brains of its computers. This is an apparent parting of the ways.

Apple hopes that developers will now create a slew of apps that work on both Apple computers and phones.  The Apple MacBook Air starts at $999.00.  That's the same price as its predecessor but the new Air has twice the battery life. The two other new computers are also priced about the same or less than their predecessors.  The MacBook Pro Notebook starts at $1299.00 and is also powered by M1.  And the Mac Mini computer starts at $699.00.  It has AI capability and is targeted for use by scientists and engineers.  These new products will be available from Apple next week.