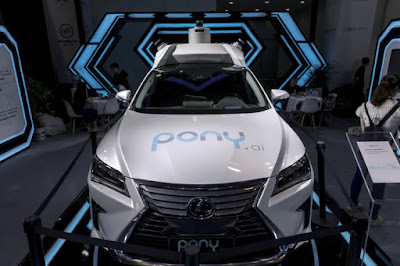 China startup Pony.ai has just secured $267 million, on top of a recent $462 million, in another round of funding. That values the company at $5.3 billion, which makes it the world's most valuable independent autonomous driving startup. It has a much higher valuation than rivals Nuro and Aurora.

The Shanghai and Fremont, California based company is backed by Toyota, with which it is exploring mobility solutions.  Bottom-line:  this is a very hot startup.  And the funding for it comes at a time when global automakers, technology firms and investors, as well as Tesla, Uber and Waymo, are pouring money into developing self-driving vehicles.

Pony.ai plans to use the funding to develop technology and expand its fleet.  In early 2019, it started developing autonomous truck technologies.  It recently received funding from China's FAW Group and will develop autonomous trucks and cars with them.  The company is showcasing its autonomous Lexus SUV and a FAW autonomous truck at the China International Import Expo this week.