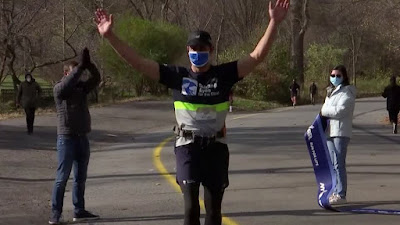 Blind Runner Does 5K Run With No Human or Dog Assistance
This is a news story that is so uplifting! A blind runner, in New York City, ran a 5K or 3.1 miles in Central Park without a guide dog or any human help.  He did it on his own with navigation provided by artificial intelligence through his headphones connected to his smartphone.  The runner is Thomas Panek, who is a well known blind person dedicated to running and also to running his Guiding Eyes for the Blind, that trains guide dogs to assist the blind.  Panek is an innovator and adventurer who just keeps on pushing the limits of his own successes.  Those successes have a great deal of application to all of us.
Personal Journey to Google
Panek is 50 years old.  He lost his vision in his early twenties from a rare genetic condition.  As I runner, I can't imagine what it is like for him to run in total darkness.  That kind of courage is remarkable.  Nonetheless, he does it and he's a marathoner.  He reached a point when he tired of following slower runners in races as guides.  So he  decided to run solo - do free running.  He contacted Google and they found him a way to do it.
Alphabet Project
Panek worked with Alphabet, Google's parent company, to create a research program to enable the blind to run independently.  Google found a way for Panek's phone through a new app to tell him where to go.  Here's how it works.  On a runner's track, the smart phone camera picks-up pre-painted "guidelines" on the track for the runner.  The app detects the runner's position vis a vis the guidelines and provides guidance through the running space by the headphones being fed by the smartphone.  The app is called the Google "Guideline" app.
What is Means to Panek
For the runner Panek, it means the world.  No reliance on his beloved guide dogs and human helpers.  It gives him total freedom to run.  To quote Panek, this gives him a feeling of "freedom, independence and that sense they you're like everyone else."  The event where Panek ran was sponsored by Google and the NY Road Runners Club on lastThursday.  It is just a great example of what the power of technology, AI and human tenacity can do.
#app #blind runner #google #Google Guideline #NYC #runs independently #smartphone #Thomas Panek news