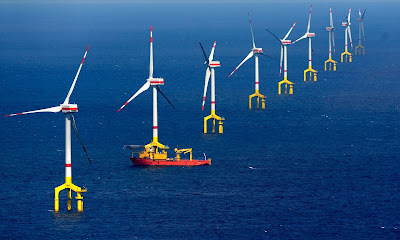 For the European Union, energy produced by wind power generation is now cheaper than that produced by fossil fuels.  As a result, the EU is considering a huge investment in offshore wind power technology and infrastructure. The nearly $Trillion investment is aimed at creating five-times or 60 gigawatts of offshore wind generated energy by 2030.  The current level is 12 gigawatts.  By 2050 the EU is targeting 300 gigawatts.  They are also targeting 60 gigawatts of wave and tidal energy by 2050.

These renewable energy goals are unprecedented and would require a major change of scale for the energy sectors of the 27 nation European Union.  The cost is estimated at $937 billion.  The EU plan is still being worked on and should be finalized by mid-November.  If put into action, it will result in a five-fold increase in offshore wind energy capacity by 2030 and a 25-fold increase by 2050.