Orlando, Florida Will be Germany's Lilium's 1st US Vertiport 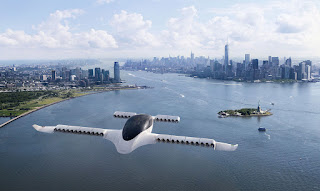 Lilium's US Air Taxi Operations Start in 2025 from Florida

Germany's Lilium air-taxi is one of the most promising, successfully tested and well funded air mobility startups in the world.  I've been blogging about the company's achievements for some time. It now has $375 million in investor funding.  It is establishing a Dusseldorf, Germany Vertiport planned for its eVTOLs - electric vertical takeoff and landing vehicles.  And now, it announced its first US Vertiport at Lake Nona, a smart city being built near Orlando International Airport.  5 year old Lilium is racing ahead in the eVTOL field to revolutionize short haul transit. Lilium is an electric, green, air taxi service, gearing up to take-off.

Lilium is a fixed wing air craft that seats five and requires an experienced pilot.  It's a green flying machine that's powered by 36 electric engines.  The eVTOL's engines point down for vertical takeoff and then shift and tilt to the rear for horizontal flight.  This may be a transformative vehicle for urban transportation.

Comparisons to a Helicopter

Lilium CEO Remi Gerber told Reuters that Lilium is " 100 times safer than a helicopter and the pricing is 5 to 10 times cheaper".  Because of the vertical takeoff and landing capabilities of Lilium, its Vertiport is much smaller and less expensive than a traditional airport.  It doesn't need a runway.  The city of Orlando is fully behind the Vertiport and Lilium, viewing it as green, efficient and cheaper urban transit for their rapidly growing region