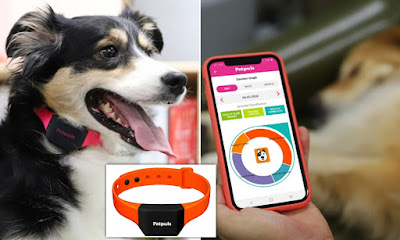 We know that a dog's bark is their best way of putting their owner on alert that something important is up.  A South Korean company has invented an AI enabled dog collar called Petpuls that is AI driven and interprets the dog's bark. The technology relays the information to the owner via their smartphone.  This collar specifically enables the owner to understand exactly what the dog is trying to communicate.  The dog's bark may be communicating emotions like anger, anxiety, sadness, happiness or relaxation.  The bark showing anger and anxiety could be communicating that there is something wrong at your home. All five emotions are determined by the artificial intelligence through the collar.  This new gadget was just unveiled at CES 2021.

A Fitbit for Dogs

The gadget is being marketed as a Fitbit for dogs.  It works with a smartphone app.  It also tracks the dog's activities and sleeping habits.  It is clearly designed to help dog owners better understand what their dogs are trying to communicate to them.  It's a new gadget to help humans make more sense of what your dog is trying to tell you, what they are up to and how they think about their surroundings.  It's a great new piece of innovation from Asia.