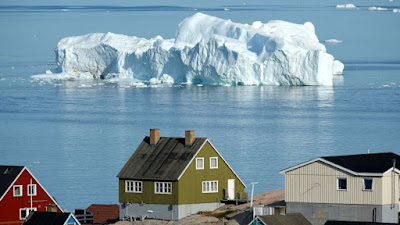 Two comprehensive, new studies by NASA and European scientists demonstrate that Climate Change is getting worse.  A team of scientists from the University of Leeds, University of Edinburgh and University College of London have discovered that the Earth is losing 1.2 trillion tons of ice every year.  That is causing climatologists to recalibrate rising sea levels.  They say that the rising water levels are much worse than anticipated.  The ice melt numbers are staggering.  The melt has escalated from 760 billion tons per year in the 1990's to 1.2 trillion tons per year during the 2010's.  That is a 60% increase.

A separate study by NASA found that 74 major glaciers in Greenland, with bases in deep, warming ocean water, are being severely undermined.  Furthermore, NASA scientists say the impact on rising sea levels of the melting glaciers is being underestimated by a factor of 2 by the scientific community.  The UN's Panel on Climate Change projects sea levels will rise 16 inches by 2100.  The two new studies suggest that number could be much higher.  The NASA study found that Greenland's ice melt is currently the biggest contributor to rising sea levels.