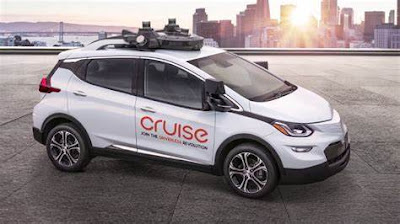 A New Vision for Autonomous Driving

This is a brand new vision of the future of autonomous driving.  A new partnership among Microsoft, GM and Cruise.  San Francisco based startup Cruise just received a huge infusion of cash to develop autonomous cars.  Microsoft has joined GM, which is Cruise's majority shareholder, along with Honda and other institutional investors to pump $2 billion worth of investment into Cruise and its autonomous technology.  Their intent is for Cruise to take their self-driving vehicles to market for widespread commercialization. The investment infusion brought Cruise's market valuation to $30 billion. That is very close to Waymo, the self-driving company owned by Google's parent Alphabet, valued at slightly over $30 billion.

Microsoft Tech and the Big Picture

Cruise will use Microsoft's cloud computing platform Azure for its self-driving vehicles.  Microsoft, using its artificial intelligence capabilities, will enable GM and Cruise to accelerate digitalization to streamline operations for robotaxis and self-driving cars for consumers.  It's an important new collaboration among major global technology, car and self-driving players to accelerate the delivery of self-driving cars.  And, there is a lot of competition out there. Along with Waymo, Argo AI, a Pittsburg based self driving startup, is developing autonomous vehicles with Ford and VW.  It has a market valuation of $7.5 billion. This is exciting new travel innovation for all of us.