Tesla is rolling out its vision of the future of driving and it is amazing. Tesla just unveiled a highly advanced and innovative steering wheel for its new Model S and Model X 2021 vehicles.  This is the world's most anticipated steering wheel and perhaps the new Tesla vehicles are the world's most intelligent cars.  The steering wheel has autopilot sensor-based drive modes and force touch buttons for Park, Reverse, Neutral & Drive modes at the base of the phone charger on the center console. Importantly, the steering wheel has no driving mode stalk (P, R, N, D).  The plan is to replace them in the future with AI and autopilot, making the vehicles autonomous when regulations permit.  Tesla's latest technology, such as updated battery packs and powertrains, are also included in these new vehicles.  Tesla is calling them the world's most intelligent cars. 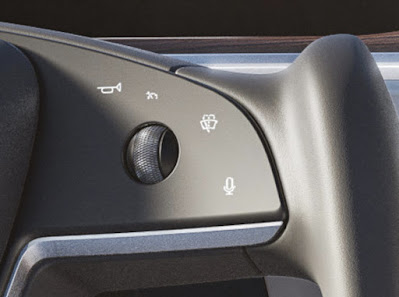 The steering wheel features what Tesla calls new, force touch buttons for the Autopilot, horn, high beams, turn signals, voice command and windshield wipers.  These functions, for now, remain manual.  But Tesla's goal is to have all of those commands be automatically performed by the vehicle.  Tesla also plans to use Autopilot and AI to know exactly what driving mode to activate.  For example, Tesla says if the front of the car is facing the front wall of the garage, it will automatically shift to reverse when the driver presses the brakes to exit the garage. Tesla says it is innovating simpler and easier forms of driving. This is a look at the future of driving happening now.