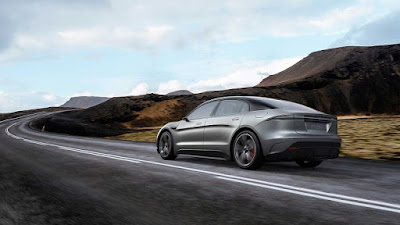 Sony has a clear vision for an electric and autonomous car.  It stunned the world when it unveiled its electric concept car, the Vision S.  The vehicle is a real, working concept/prototype e-car that Sony is road testing.  Sony, an unlikely car company, is very serious about developing the vehicle.  The Vision S contains the ultimate in Sony technology.

The e-car is a driving showcase for Sony's latest innovations.  For example, there are a series of displays that stretch across the dashboard, providing user interface and entertainment for passengers.  The middle display and one in front of the passenger seat provide access to the car's media controls.  Entertainment includes Sony movies and music.  Rear seat passengers have similar touchscreens.

The Vision S has two, 200 wH electric motors - one on each axle - that enable it to go 0 to 60 mph in 4.5 seconds.  The vehicle can reach top speeds of 149 mph and has a range close to 400 miles.  Sony is serious about moving the vehicle forward.  It says the underlying technology can power other vehicles like SUVs and minivans.  Much more news about the Vision S is expected from Sony during 2021.