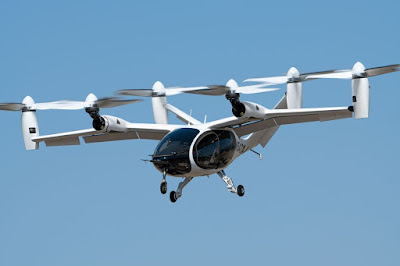 The dawn of flying taxis is getting closer.  California based startup Joby is exploring the possibility of going public.  Joby is a very hot aircraft technology company developing an all electric, zero emissions, vertical air taxi which it hopes to put into service by 2023.  Also it recently took over Uber's flying taxi unit Elevate.  As part of the deal, Uber took a stake in Joby.

There is no guarantee that Joby will go public.  But it has hired investment bankers and it reportedly is exploring a merger with what is called a "blank check" or special purposes company at a valuation of $5 billion.  It's an alternative way of going public rather than the traditional IPO route.  Joby is currently valued at $2.6 billion.  Going public would potentially bring in significant new money for Joby to continue the development and launch of its air taxis.  It is also doing R&D on flying cars.

To take a look at journalist Edward Kane's latest book "New Inventions For The 2020's"  Part 1, go to https://read.amazon.com/kp/embed?asin=B08THWN8JD&preview=newtab&linkCode=kpe&ref_=cm_sw_r_kb_dp_ddZcGb5W5N8EM     It is the #1 New Release on Amazon's Curiosities and Wonders Section.  I co-authored the book with Ed.