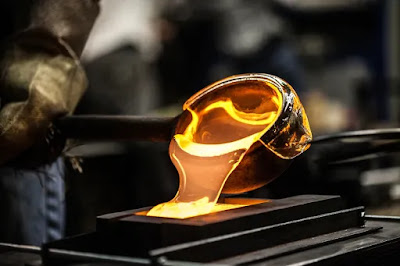 Physicists in Germany have discovered an entirely new state of matter - liquid glass.  The team at Germany's University of Konstanz says the new material is unlike anything they've seen and has very unusual properties.  The new state of matter is a mysterious process that takes place between liquid and solid states of glass.  The atoms of liquid glass can move but they can't rotate.  The molecules appear to be locked in a endless struggle between the liquid and solid states of glass.  For more than 20 years, scientists have predicted the possibility of liquid glass and have worked to discover it.  The German team is the first to do it.

Significance of the Discovery - Explaining the Unexplainable

The discovery goes way beyond glass and may shed light on unexplained processes from in tiny biological cells to large planetary systems and cosmological events in space.  Scientists call this unexplained disorder.  To most of us, it is like explaining the unexplainable.

Braking the Code on Glass

In regular glass, the molecules are locked and frozen in a disordered state.  In the new liquid glass discovery, the molecules have mobility and then form some type of locked rotation between liquid and solid matter.  The two stay locked in competition, result in a new state of matter - liquid glass -  and are a form of unexplained disorder, which now scientists are able to track for clues and results.  This is a major scientific discovery and is published in PNAS.