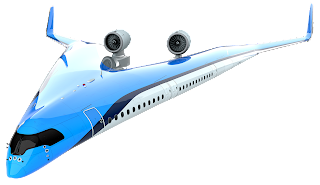 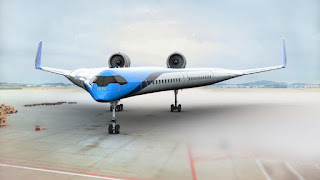 A new aircraft, the Flying-V, is a look at the exciting future of flying.  A scale model of the experimental aircraft just took flight from a military base in Germany.  The aircraft has huge wings and is designed in a V configuration.  The blended wing concept is the invention of Delft Technical University (TU Delft) of the Netherlands, funded by KLM Airlines and assisted by a support team from Airbus.

The flying-V is a fuel efficient, long range aircraft designed as an alternative to traditional jumbo jets.  It gets 20% better fuel efficiency than a traditional Airbus A350 jet, which is today's most advanced aircraft design.  Passenger seats, baggage and fuel tanks are all built into the wings.  When full scale, it will have the capacity to hold 314 passengers.  It is 15% more aerodynamically efficient than conventional jets.

The scale model that just took flight was controlled by a radio link and flew like a drone.  During the flight test, the plane's takeoff, turns, maneuvers and landing were all successful.  It has two, 4 KW electric, ducted fan engines.  For KLM and the TU Delft team, the ultimate goal is to develop an emissions free, long haul aircraft.