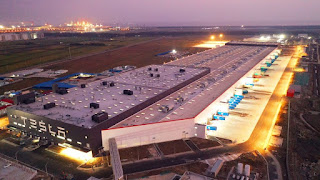 Tesla Giga Shanghai facility is rapidly expanding production.  It is targeting the production of 200.000 Model Y's annually and 450,000 Model 3's  Those two vehicles will combine to produce 650,000 vehicles yearly by Tesla's new Giga Shanghai facility.  The Tesla Model Ys will begin production in November in Shanghai.  A fully  functional Model 3 factory has been built in record time at the Shanghai plant. And a second phase of construction is just about complete for the Model Y all-electric crossover production facility.

What Does This Mean For Tesla in China?

The stakes for Tesla expanding production in China are huge.  The Model Y production in the gigafactory could greatly expand Tesla's reach into the Chinese mainstream auto market. The Model 3 is the first vehicle that Tesla produced in China and it is very successful as an all-electric sedan.  When you add in the crossover Model Y, that could be a great fit because crossover vehicles are very popular in China.  Two versions of the Y are now available for order in China:  the Model Y Dual Motor AWD at $71,443.  And the Model Y Performance at $78,200.  Delivery is estimated to happen during Q1 2021.