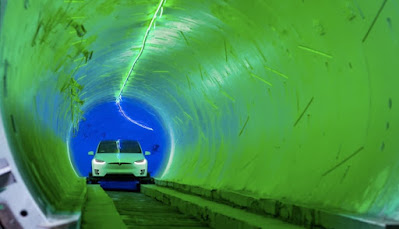 Entrepreneur Elon Musk has made major global news in 2020 with his huge SpaceX accomplishments and Tesla leadership in electric vehicles.  He's about to make more news with his tunnel company, The Boring Company.  Musk has almost completed his first operational Loop tunnel under Las Vegas.   In a tweet, Musk said that tunnels under cities with self-driving cars "will feel like warp drive".  That's his description of the future of urban transportation.  For the past year under contract by the city of Las Vegas, Musk has been building an underground loop tunnel system for public use.  It will shuttle passengers in self-driving Tesla cars to destinations in Vegas within minutes.

Tunnels are a key part of Musk's green, driverless urban transit vision along with electric vehicles and self-driving technology.  His Las Vegas Loop is expected to be ready for the Consumer Electronics Show (CES) January 2021 in Las Vegas.  The show will be online because of COVID-19 so the Loop could debut at the online show there.  Musk's goal is to connect all major tourist destinations on the Strip, the McCarren International Airport and downtown Las Vegas through the Loop.  He wants to do a similar project in Los Angeles.  He tweets "Embrace Tunnels!"