Is That a UFO on NASA's Live Feed? 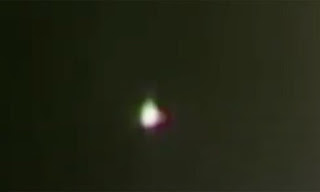 Spacecraft With Speeds of 27,000 km Per Hour

NASA's live camera feed from the International Space Station (ISS)  captured, in infrared video, the speeding image of an unidentified flying object chasing the ISS,  The object was a large white orb speeding at 27,000 km per hour (16,777 mph) behind and toward the ISS.  It was visible in the live NASA feed for forty minutes.  It moved upwards, passed the ISS and then faded away.  UFO expert Scott Warring said it is proof of the existence of an alien space vehicle.

Is It A Satellite, Meteorite, Unknown Spaceship from Earth or UFO?

The object was first spotted leaving the Earth's atmosphere, which suggests it may have launched somewhere near the planet Earth.  It first appeared as a small dot on the screen and then flew closer and closer to the ISS.  Warring says he thinks the aliens controlling the vessel might have been trying to observe the activities of humans in space.  A similar object was spotted on the NASA ISS live camera feed in January 2020.  The big question remains:  are these satellites, meteorites, unknown space vehicles from Earth or UFOs.  No comment from NASA.