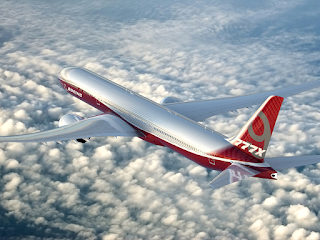 The Boeing 777X is the world's largest twin engine passenger plane.
General Electric GE 9X engines for the 777X just received FAA certification. It is the largest engine ever put on a plane. Its diameter is wider than a 737 fuselage. The engine is huge but very efficient. It cuts emissions by 30% and operational costs by 10%. This clears a big hurdle to bring the jet to market. After thousands of hours of test flight hours, the GE 9x has been given FAA part 33 certification.

This is a big boost for GE.  GE has orders and commitments for 600 plus GE 9X engines.  It has delivered 8 GE 9X test engines and 2 test spares for Boeing's four 777X test planes.