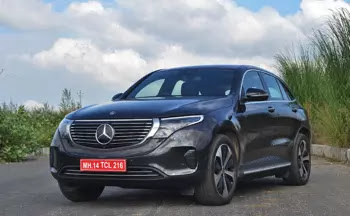 No Emissions Plus Luxury, Power & Performance

Mercedes-Benz has one of the hottest electric vehicles in the global marketplace.  The company's first, all electric SUV - the EQC - is so hot and in such demand in Europe that Mercedes is postponing its debut in the United States until 2021.  The EQC is going to hit a very big market - lndia - in late September.  The Mercedes EQC gets 450 km on a single, 40 minute charge.  It's the first of a sub-brand -EQ - under which Mercedes will launch its electric cars. Mercedes says it will have 10 brand new, EQ models by 2022. Based on the GLC midsize crossover model, the EQC directly competes with the Audi e-tron, Jaguar 1-Pace and the Tesla Model X. The base price of the vehicle in Europe is 67,900 euros.

The interior of the vehicle is luxurious.  An automotive expert in India called it the equivalent of a "7-star hotel".  What differentiates the EV is its powerful, dual motor setup: one for the front axle and the other for the rear. The 80 kWH electric motor produces a power output of 408 horsepower.  It can accelerate from 0 to 60 mph in 4.8 seconds and the top speed has been capped at 180 kph.

No Need to Brake

Another unique feature:  if you fully activate the brake energy regeneration feature, the car sharply slows when you take your foot off the accelerator and brings it to a complete stop.  Mercedes has big plans for the EQC.  It plans to release a next generation version in 2022.