Swiss Voters For $6.5 B in Fighter Jets 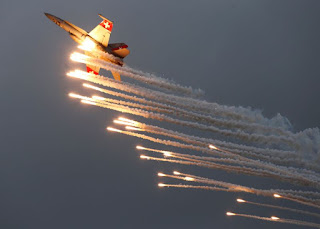 For the Swiss, armed neutrality is a long standing tradition.  In an extremely close vote, Swiss voters have backed a government plan to buy top of the line innovation in jet fighters, to the tune of $6.5 billion. The vote in favor was 50.2% and it is binding.  It's a sign of our globally turbulent times. This is a brand new world.  And, for the Swiss, this is a case of the virtue of self-reliance in the supersonic and coming hypersonic age of fighting jets.

Virtue of Self Reliance in Defense

Supersonic jets and fighter jets can traverse Switzerland in under ten minutes.  The Swiss government argued that it is now necessary to replace their aging fleet of 30 F/A-18 Hornet jets that go out of service in 2030.  Switzerland is a neutral country and may have no apparent enemies but global conditions rapidly change.  And Swiss voters have agreed with the government that there is a need to be prepared and protect themselves first, before relying on the help of other nations.

In 2021, the Swiss government is now authorized to buy state of the art fighter jets.  Among the big contenders they will be looking at:  Lockheed Martin's F35-A Lightning Jet, Boeing's F/A-18 Super Hornet, Airbus' Eurofighter and the Rafale from France's Dassault.