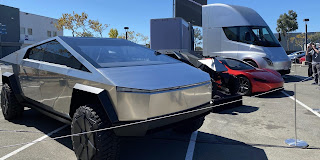 Tesla's 2020 Annual Shareholders' Meeting and Battery Day did not disappoint.  CEO Elon Musk revealed that he has a $25,000 electric car in the works that will be fully autonomous.  The EV, which hasn't been named yet, will be on the market in three years.  The breakthrough price, Musk said, has been made possible by his new breakthrough battery technology.

Musk's next generation battery is a very big deal.  At one-half the cost, the 4680 delivers six times more power, provides 5 time more energy and expands the driving range by 16%.  Production on it has already started.  The battery's cost savings and increased power will impact the entire Tesla product line over time.  Tesla has brought down battery costs from $600 kWh to $150kWh.  According to The Wall Street Journal, to reach cost parity with petroleum, Tesla and the EV industry need to reach $100 kWh.

CEO Musk forecasts that Tesla's 2020 deliveries will increase between 30% and 40% over 2019.  That equals 477,250 and 514,500 cars.  He is targeting the eventual production of 20 million vehicles a year, that would make Tesla the world's largest automaker. He announced that the company is working on a significant upgrade on its Autopilot driver assist system.  In the near future, a full, self-driving version of the Autopilot will be released.  Musk also revealed a new $140,000 version of its Model S called Plaid with 1100 horsepower that can be pre-ordered now.

The Tesla 2020 Shareholders' Event was like no other.  Musk addressed an audience of parked Teslas with shareholders inside the cars for safe social distancing.  He also had four EV prototypes on display:  the Tesla Roadster, Cybertruck, Tesla Semi Truck and the Tesla Cyberquad.