Getting Your Groceries by Drones 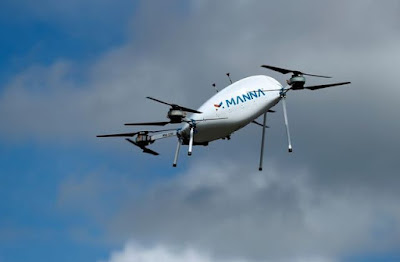 The world's 3rd largest supermarket/retail group Tesco is partnering with Irish entrepreneur Bobby Healy and his Manno Aero drone company to test home deliveries of groceries by Manno drones, first in Ireland.  Healy's drones are currently following fast food deliveries with their drones.  Tesco is headquartered in the UK. Its CEO Dave Lewis calls drone grocery deliveries the kind of disruptive innovation he wants to do.  Manno is an accomplished drone company and has been delivering medicine during COVID in Ireland.  Tesco CEO Dave Lewis says Manno has the proven capacity to deliver goods with its drones and now he wants to apply it to Tesco operations, specifically for its grocery store customers.

Tesco will start with delivering a few grocery items per household in Ireland within 30 minutes to an hour of the order being made.  Manno in Ireland has a "Specific Operating Permission" from the Irish Aviation Authority to fly small unmanned aircraft in Ireland. So tests should proceed quickly.  In the meantime, new European Union rules overseeing drones have been postponed until the end of 2020 because of the COVID pandemic.  But the use of drones to deliver goods is launching globally with Walmart testing it in North Carolina, Amazon cleared to test drone deliveries by the FAA and now this new partnership in Europe between Tesco and Manno Aero.