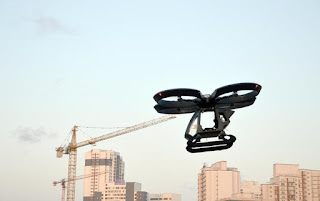 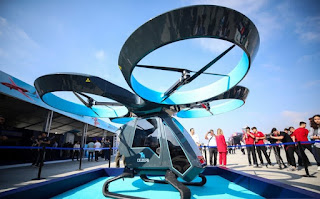 Turkey's first flying car, named Cezeri, has successfully completed its first series of test flights.  Tethered and untethered, the 507 pound vehicle rose and hovered 33 feet in the air.  The vehicle is an electric, vertical takeoff and landing (eVTOL) quadcopter.  The test flights, done by remote control in Istanbul, took place a year and a half after local engineers came up with the concept and started drawing designs.

The Cezeri is composed of large quadcopter-like blades with a small, glass enclosed pilot/passenger unit and take-off/landing gear grounded underneath.  It flies entirely on electricity.  It has eight electric motors, propellers and a rechargeable battery.  With three redundant intelligent flight systems, developers say that it will be equipped with AI systems in the future.  The goal is to have it reach a cruising speed of 62 mph, a flight altitude of 6562 feet and a range of 106 miles.

The prototype was put together by Istanbul-based drone and control systems manufacturer Baykar Defense.  The Chief Technology Officer behind Cezeri is Selcuk Bayraktar, the son-in-law of Turkey President Erdogan.  Bayraktar says it will take 10 to 15 years to develop Cezeri into a common form of transportation.  But, before that, he says it will be used for recreational purposes, including as a quad bike in rural areas, for 3 or 4 years.  This is another look at the exciting future of travel, that is electric, zero emissions and is designed to get you above the traffic.