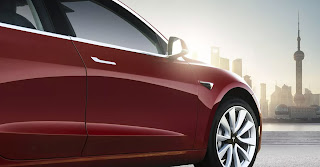 On Model 3's in China

Tesla has made an important move on the battery front in China.  It's about to start selling Model 3 vehicles in China equipped with much less expensive, cobalt-free lithium ion phosphate (LFP) batteries.  China-made Model 3's currently use nickel-manganese-cobalt batteries.  The starting price in China with government incentives on Model 3 is $39,900.  Reuters says the Tesla announcement about the battery upgrade may come tomorrow.

In the electric vehicle marketplace, the technology race is all about bringing down battery costs and extending range.  Cobalt is one of the most expensive metals in the world.  Taking that cost out of the battery will be a big savings for Tesla. Tesla is expected to use the China made LFP batteries in all Model 3 vehicles made in China.  That will significantly bring down the cost of producing the vehicles and perhaps lead to eventual reduced pricing for consumers.

Tesla sold 11,000 cars in China in August, most of which were Model 3's.  Tesla is also nearing completion of a new manufacturing facility for its Model Y sports utility vehicle at its Shanghai gigafactory.  China is the world's largest auto market, Tesla is the world's largest EV maker and Tesla continues to capitalize on its growing market position in China.