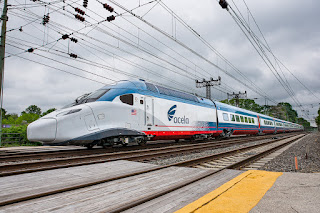 America's fastest train, the Acela, is going to go faster.  It's being speed tested at a 30,000 acre facility near Pueblo, Colorado for its rollout in 2021.  The train will hit speeds of 165 mph in the Boston to Washington, DC corridor.  Amtrak is calling it "a gamechanger". The actual increase in speed is about 15%.

The new Acela will use 20% less energy, carry 25% more passengers and cut 15 minutes off the train trip between Boston and Washington, DC which takes about 5 hours,  And, there is a lot of new technologies being incorporated into the Acela trains.

US vs. Asia and Europe

In terms of fast train technology, the US is behind both Europe and Asia.  The primary reason is the lack of investment in new infrastructure that can carry high speed trains.  Some parts of the Boston to Washington, DC train corridor are 100 years old.  Europe and Asia, particularly China, have the infrastructure and right of ways built specifically to serve as high speed train corridors.

The new Acela is part of a $2.4 billion modernization effort at Amtrak that continues despite the pandemic and Amtrak's decision to furlough or layoff more than 2,000 employees.  And because of COVID-19, Amtrak is adding new protections in the new Acela cars.  They are changing filtration and airflow on the trains, installing sanitizing stations and building in contactless features like self-serving cafes.  The trains are also designed with stronger crashworthiness standards.