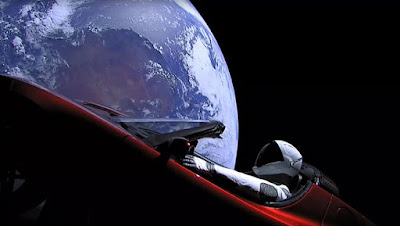 "Starman" Behind the Wheel, Inside a Rocket

SpaceX and Tesla CEO Elon Musk's red, $100,000 Tesla Roadster had made its closest approach to Mars.  The Roadster driver "Starman", which is a mannequin in a spacesuit, are part of a payload inside the second stage of a SpaceX Falcon Heavy rocket.

One of entrepreneur Elon Musk's major goals is to colonize Mars and make all of us an interplanetary civilization. SpaceX says the Falcon Heavy rocket vehicle with the Roadster inside made their first close approach to Mars and was within 5 million miles of the planet.

Harvard astronomer Jonathan Dowell is tracking the journey.  He says the SpaceX spacecraft is in an elliptical orbit around the Sun.  The vehicle is 37 million miles from Earth and has travelled 1.3 billion miles since its launch in 2018.  It will make its closest pass at Earth in 2047 at a distance of 5 million km.

Why Did Elon Musk Put a Roadster into Orbit?

The answer is part showmanship and part science.  Normally, test flights include mass simulators on concrete or steel blocks.  Musk finds that boring.  He says he wanted to do something unusual and chose a red, $100,000 Tesla Roadster and Starman to monitor how they endure the rigors of space.  Starman's spacesuit is also being monitored to determine its durability during this very long multi-decade mission.