Netherlands' Flying Car On the Road 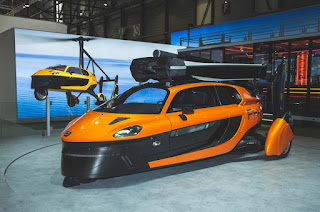 Authorized on Roads in the Netherlands

The world's first commercial flying car - the PAL-V Liberty made by Dutch company PAL-V - has been approved for use on roads in the Netherlands.  The Liberty is a gyrocopter.  Rotors on the top of the vehicle provide it lift to fly.  The rotors are powered by a separate propeller engine in the back of the vehicle.  Liberty can hover like a helicopter but it doesn't take-off and land vertically like a helicopter.  It needs a runway of at least 590 feet to gain speed for take-off and 100 feet of runway for landing.

The Liberty can drive up to 99 mph on the road and when flying has a maximum speed of 112 mph.  Switching from the driving to the flying mode takes a few minutes.  Clearance will be needed from regulators for flying the flying car.  PAL-V says they expect to get clearance from the European Aviation Safety Agency in 2022.

The first 90 vehicles sold will be the Liberty Limited Edition Pioneer at a price of $599,000.  The next vehicle to launch will be the Standard at $399,000.  This is an important new piece of driving and flying technology accelerating the future of flying cars.