Second Launch This Week of Fleets of Satellites Today 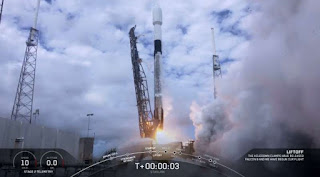 SpaceX today successfully launched into orbit another fleet of 60 internet satellites.  It was the second Starlink launch this week as SpaceX and CEO Elon Musk continue to build their growing mega-constellation of satellites to deliver inexpensive, high speed internet from space.  Musk now has in orbit more than 800 Starlink satellites.

The technology that Musk has developed at SpaceX is remarkable.  Today, nine minutes after launch, the Falcon 9 rocket's 1st stage booster that boosted the satellites into space returned to Earth and successfully landed on one of SpaceX's drone ships, known as Just Read the Instructions,  in the Atlantic Ocean.  The precision of the landing is awesome. The 60 satellites continued into space for their low Earth orbits.  This is the 19th launch for SpaceX in 2020 and the 100th Falcon 9 rocket flight to date.

The Starlink Network in Space

SpaceX plans to have an initial fleet of 1,440 low Earth orbit satellites to provide the world, particularly remote, underserved areas, with inexpensive broadband internet services.  CEO Musk thinks Starlink could generate $30 billion a year in revenues, some of which he's like to plow back into his plans for missions to Mars.  Private beta-testing of the Starlink system is now underway and is said to be going well.  That will be expanded to broader public testing before the service officially rolls out in the US and Canada.  The next launch of more Starlink satellites is expected in November.  Starlink will eventually be composed of tens of thousands of  small internet satellites.