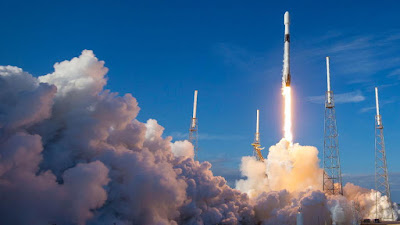 SpaceX launched 60 more Starlink internet satellites into orbit on Sunday with another batch ready to launch on Wednesday.  The Sunday launch to build an inexpensive global internet service brings the total sats deployed to 835 satellites.  That is enough to reach CEO Elon Musk's target of 800 deployed satellites in low Earth orbit to start testing for moderate internet coverage for parts of North America.  This was Space X's 14th launch of Starlink satellites.  To achieve global broadband coverage, Musk says he plans to launch 120 new Starlink satellites per week.

Not just the Starlink technology is incredible, so too is the rocket technology for launch that's being deployed.  The Sunday launch was aboard a SpaceX Falcon 9 rocket's sixth flight.  After the successful launch, the first stage of the rocket landed on an off-shore drone ship.  This was the 62nd successful booster recovery for SpaceX  with 42 of them at sea.  Within minutes after separation, the two halves of the rocket nosecone fell by parachute and the netting was retrieved by waiting ships.  This is reusable rocket technology that is becoming routine for SpaceX but is breakthrough.  Meanwhile the latest 60 Starlink satellites are now in low Earth orbit as the mega-constellation builds.