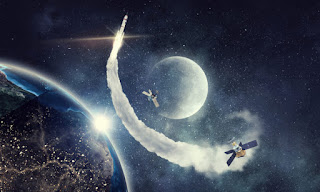 The US Department of Defense has awarded SpaceX a $149 million contract to build hypersonic and ballistic missile tracking and warning satellites.  The satellites will be positioned in low-Earth orbit similar to Starlink.  Starlink is SpaceX CEO Elon Musk's mega-constellation of satellites to provide the world broadband internet at inexpensive prices.  The Pentagon contract is a first for SpaceX and yet another major win for CEO Elon Musk.  This contract comes 3 weeks after US Defense Secretary Mark Espey announced that China and Russia have weaponized space with killer satellites and directed energy weapons.

The new satellites for the military will have wide field of vision, infrared sensors that can pinpoint and track potential missile threats coming in from space at hypersonic speeds and then help to trigger missile defense systems.  The SpaceX contract is with the Space Development Agency within the Pentagon.   The satellites are a new design but they are based on the existing bus from Starlink broadband models.

L3 Harris won a similar contract to SpaceX to build satellites for the military.  The Space Development Agency hopes to launch a combined 8 satellites from both companies in late 2022.