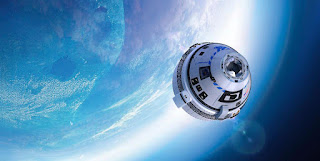 Spaceship with Checkered Past

Boeing has built the Starliner, a next generation spacecraft, that's designed to ferry astronauts to and from the International Space Station (ISS).  It is an alternative vehicle to the highly successful SpaceX Crew Dragon that brought two astronauts back and forth to the ISS this past summer.   The Starliner has been plagued with development problems, test failures and schedule slippages.  Now it has lost its astronaut Commander Chris Ferguson.  Ferguson is an engineer who helped Boeing develop the space vehicle.

Starliner has experienced a rocky road to development.  In December 2019, during an un-crewed flight, software problems caused the engines to misfire.  Starliner entered the wrong orbital path, never reached the ISS and was forced to return to Earth.  Now, for "personal reasons" Boeing employee Mission Commander Chris Ferguson suddenly announced he can't go into space.  That turns the next Starliner mission into a totally NASA mission with astronaut Barry Witmore as Ferguson's replacement as Commander.

Boeing says it will do another un-crewed flight in December or January.  The first crewed flight may happen in June 2021.  Chris Ferguson says he's totally committed to Starliner and will continue working on it but not as commander of the spacecraft in space.

Boeing's Starliner is being developed under NASA's Commercial Crew program. The program gave $4.2 billion to Boeing and $2.9 billion to SpaceX in 2014, specifically to build privately owned spacecraft that NASA could use to ferry astronauts to the ISS.  SpaceX clearly won that race with the Crew Dragon launch in May.