Elon Musk Says Solar Roofs are His Next Killer Product 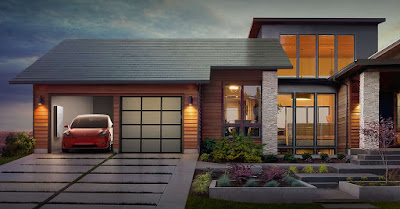 Tesla founder and CEO Elon Musk says the company's next killer product is solar roofs.  He made the announcement during his Q3 2020 conference call.  He says solar roofs will be very hot in 2021. Tesla is hiring hundreds of roofers to get ready.  Musk promises a future of beautiful, tough, resilient solar roofs alive with energy.  Musk feels that is an energy future that we all want and he's building it into a big business.  The Tesla solar roof is composed of solar tiles not solar panels.  It provides the protection of a roof but also generates solar powered electricity.

Musk says his solar roof business is accelerating.  Deployments more than doubled in Q3 2020 to 57 MW compared to the previous quarter.  Musk told investors and analysts on the conference call that roof deployments are almost tripling sequentially.  On its website, Tesla currently has more than 200 open roofer positions in the US and appears to be ready to hire in Canada.  Tesla also recently reduced the price of the solar roofs.