Gravity Industries Jetpack Being Tested in the UK 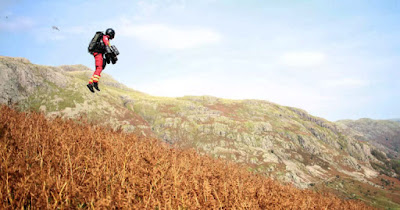 A jetpack made by Gravity Industries is being tested in the Lake Region of the UK for daring aerial paramedic rescues.  The Great North Air Ambulance Service (GNAAS), which is a helicopter emergency medical service, is testing the jetpack to see how sending paramedics in a jetpack to the rescue of victims safely works.

For instance, in a skiing accident on a mountain slope, a jetpack would allow a paramedic rescuer to arrive to the victim in minutes rather than an hour hiking up the slope.  According to the GNAAS Director Andy Mawson, a jetpack rescuer could mean the difference between life and death.

Gravity Industries of the UK has completed a number of flights in what they call an "iron man" suit and have set speed records with it. The flying paramedics in the future will be equipped with a medical kit, including defibrillators for heart attack victims and pain medication for people who have broken bones. The company was founded and is run by adventurer/entrepreneur Richard Browning who has invented a new way of travel and rescue by jetpack.