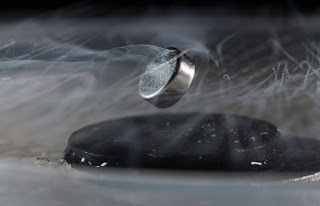 University of Rochester engineers have created a super, superconductor that could save the world billions of dollars in annual electricity costs.  The engineers created a material composed of hydrogen, carbon and sulfur which becomes a superconductor when squeezed between two diamonds.  Superconductors are materials that effortlessly conduct electricity with no resistance and no energy lost.  Until the University of Rochester breakthrough, superconductors only worked at extremely cold temperatures of minus 100 degree Fahrenheit and below.  The new superconductor works at room temperature of 59 degrees.  That opens up the possibility of widespread use.

Why This is Such a Big Deal

This breakthrough superconductor could usher in an age of dramatically cheaper, faster and more powerful electricity.  According to the research team, widespread use of superconductors could generate super powered computers and high speed floating trains, all through the power of extremely cheap, fast, powerful electricity.  Concerning the floating trains, the engineers say superconducting material on the underside of the trains would repel magnetic tracks below and make the train "float".  This would be a much more powerful version of train travel by magnetic levitation.