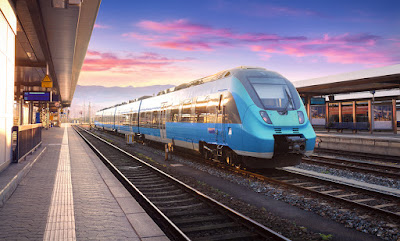 Newly listed on the Frankfurt Stock Exchange, Siemens Energy has signed an MOU (memorandum of understanding) with Siemens Mobility to jointly develop and sell hydrogen systems to power trains.  This is another new and important example of the hot and expansive development of hydrogen fuel cell technology.  The two companies have several goals.   They want to standardize the technology for fully hydrogen powered trains made by Siemens Mobility.  They also want to sell the technology to external companies to promote the "hydrogen economy of Germany and Europe".

Siemens Energy is developing green hydrogen, which is produced from renewable sources like wind and solar power.  Siemens Mobility specializes in transportation and is still part of the parent company Siemens.  Siemens Energy was spun off from the parent in July and is being publicly traded as an independent company.

In the UK, trials on running a hydrogen powered train started in September.  And in Austria, OBB, the Austrian Federal Railways, is testing passenger service on a hydrogen powered train in the southern part of Lower Austria.  Green hydrogen is one of the travel routes to a greener, zero emissions transit system and it is being developed globally, including in Asia.