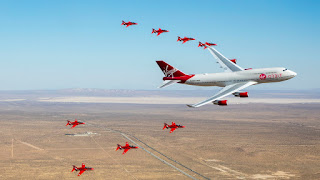 Branson is using highly modified 747 jumbo jets to launch, from mid air, rockets carrying satellites and place them in orbit.  The target market is small satellites ranging from the size of a toaster to a household refrigerator.  The satellites are placed in low Earth orbit for highly sophisticated services ranging from commercial applications to national security information gathering.  Launches can originate from any airports capable of 747 take-offs and landings.

Virgin Orbit is in direct competition with Jeff Bezos' Blue Origin and with Elon Musk's SpaceX.  At the moment, SpaceX is leading the way in the commercially-owned space exploration and satellite launching industries.  Musk has considerable NASA and corporate contracts to launch satellites and is building Starlink, his mega-constellation of satellites to provide the world with inexpensive internet services.