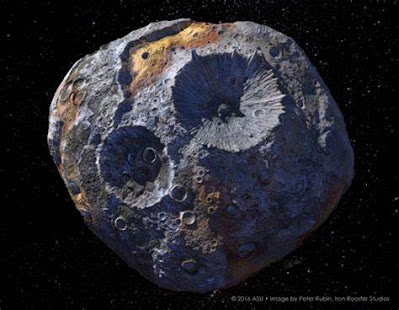 NASA just struck gold!  NASA's Hubble Space Telescope has discovered a rare, heavy and tremendously valuable asteroid called "16 Psyche".  The metal asteroid is located between Jupiter and Mars in the Solar system's main asteroid belt.  It's about the size of West Virginia and is 230 million miles from Earth.  Unlike most asteroids that are rocky or icy, 16 Psyche is almost entirely metal. The research team that made the discovery thinks it may be made of iron and nickel.  Given its size and metal content, 16 Psyche is valued by experts at $10,000,000,000,000,000,000.  That is 10,000 times more valuable than the value of the global economy.

In 2022, NASA Discovery Mission Psyche will launch atop a SpaceX Falcon Heavy rocket.  An orbiting probe will reach Psyche in 2026.  It will be tasked with helping to determine Psyche's exact metal content.  16 Psyche is the only known object of its kind in the Solar system.  It is believed to be the dead core of a planet that died during its formation in the very distant past.