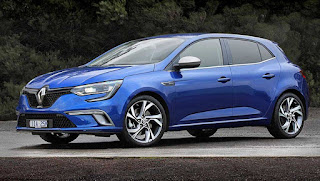 French carmaker Renault unveiled a very sporty electric car concept called "Megane eVision".  The company is betting on medium sized, family vehicles to try to turn itself around and move away from losses.  Under new CEO Luca de Meo, the company is on a new trajectory with a big push on electric vehicles.  The strategy is also to focus on its most profitable models and push up prices.

The new electric vehicle has SUV style large wheels but is much smaller.  CEO DeMeo says a whole new generation of innovation packed EV's will be coming from Renault.  The new car will be the first built on vehicle architecture developed jointly by Renault, Nissan and Mitsubishi called the CMF-EV platform.  The final model to go into production will be unveiled in 2021.  Renault currently makes a small electric car known as Zoe.