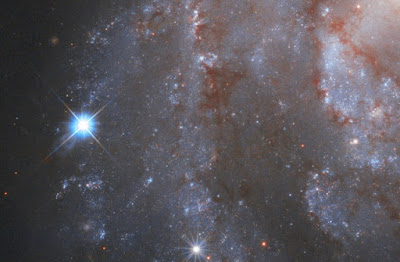 Photo From Hubble Telescope Before It Faded Away

The Hubble Telescope captured images of one of the most spectacular light shows in the universe ever seen.  It was a supernova that outshone every star in its galaxy.  The supernova, called SN2018GV, put on a gorgeous display with the radiance of 5 billion suns before it gradually started fading away.  Fortunately for us, it was caught in a series of images by the Hubble Telescope, operated by the European Space Agency (ESA) and NASA.  The supernova was first spotted by Hubble in January 2018, 70 million light years from Earth.

SN2018GV was a binary dwarf star that was pulling in matter from its companion star.  In space, once a star starts pulling in matter from its companion equal to 1.44 times the mass of the sun, a thermonuclear process starts to begin and the combining star starts to explode.  In effect, this is the death of the star and the process ejects matter at the speed of 6% the speed of light.  That results in a peak brilliance of 5 billion times the Sun.

The event was spectacular.  And it will help astronomers more accurately measure the distance to faraway galaxies. Astronomy is revealing the wonders and mysteries of space. And technological advances are getting us there.